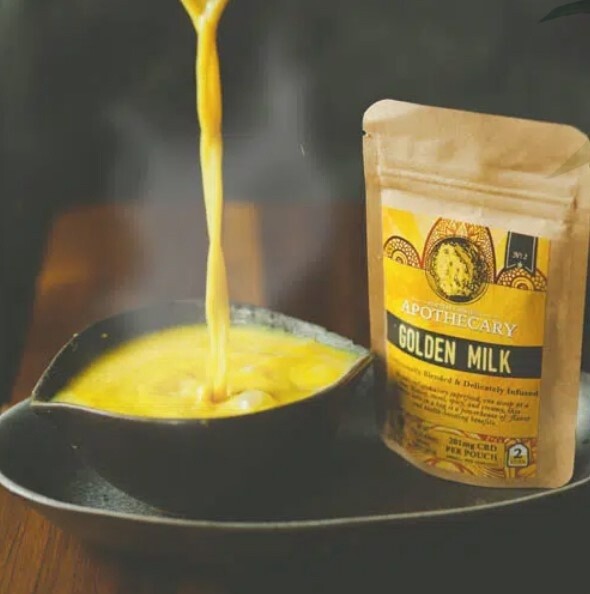 An All-New CBD Golden Milk by The Apothecary

The Brothers Golden Milk is smooth and delicious, with a warm and comforting flavor. Many of the spices you will recognize from similar flavored beverages, such as spiced Chai. Similarly, Golden Milk has a spicy, somewhat sweet flavor, but it is noticeably fuller and more rounded, due to the addition of organic coconut powder and organic coconut sugar.

Note: We highly suggest brewing with a milk alternative, like hemp or oat milk (any milk will do, including animal or grass fed milks). For a lighter preparation, you can prepare with water, though we suggest including some milk or milk alternative if possible.

What are the benefits of Golden Milk?

Golden Milk, also known as Turmeric Milk, is a beverage with origins in India.

The key ingredient in Golden Milk is turmeric root. Turmeric contains the chemical known as Curcumin, an incredible bioactive compound. It has been used for centuries in Ayurvedic medicine, mostly due to its high antioxidant profile and to support a healthy immune system. You may also recognize the cousin of turmeric at your local grocery or health food store, ginger. Like ginger, turmeric root is known for its branching tube like roots, known as rhiszomes, that lay just below the surface of the soil.

To complement turmeric’s nutritional profile, this CBD-infused Golden Milk also combines a handful of other nutrient dense foods, including ginger root powder, Himalayan pink salt, and black pepper. Black Pepper contains another chemical, known as piperine. Piperine has shown to enhance curcumin’s absorption of the body, which means more of the compound is accessible to your body’s full chemical system.

People have enjoy edGolden Milk around the world, largely due to the collective health consensus regarding the benefits of turmeric. Consumed for thousands of years, Golden Milk’s most simple recipe has more often been the simply combination of turmeric, milk and occasionally honey. Part of the unique history of this beverage is that many different regions of the world have developed different recipes.

In that same tradition, we’ve revisited Golden Milk and made something unique to The Brothers. Our Golden Milk is an easy-to-mix blend of organic coconut milk powder, low-glycemic coconut sugar, fresh organic turmeric, ginger, vibrant Vanilla beans, and an array of savory & illuminating spices. We’ve also added an effective serving of CBD, sourced from US-grown hemp and tested for purity by licensed third-party laboratories.

When should I drink CBD Golden Milk?

Golden Milk does not contain caffeine, so you can enjoy it at any time of day. It also does not induce drowsiness or grogginess, so it be be incorporated into morning routines.

How do you make CBD Golden Milk?

The Brothers Apothecary exclusively uses hemp that contains <0.3% THC and is licensed with the Department of Agriculture.
*Disclaimer •  Testing

Save this product for later
Display prices in: USD